Earlier this week, Facebook announced a set of changes to its News Feed that would increasingly prioritize content shared by family and friends and show users less content from brands and news organizations.

It’s largely a response to allegations of Russian influence in the 2016 election, as well as implications that using the social network was worsening people’s mental health and well-being. Chief Executive Mark Zuckerberg has taken it on as his New Year’s Challenge, and he’s already making swift changes to turn the social networking giant into a force for good.

But if your practice has a Facebook Page (here’s why you should), what do these changes mean for your practice and the social content you’re sharing?

Facebook has publicly stated that it will prioritize stories that have lots of engagement among people, so sharing interesting stories is key moving forward. True, Facebook will prioritize those stories that are shared by people, not pages, but we believe that tagging people in the items you post should help you gain more exposure. Remember, Facebook isn’t eliminating posts from pages like yours that your patients have liked – it’s just changing its algorithms to ensure that the best stories rise to the top.

98% of Facebook’s revenue comes from the ads it sells on its platforms, so it wouldn’t be making this News Feed change if that number would take a significant hit.

And while it’s stock has taken a 4% hit today, it won’t be battered forever. As much as Zuckerberg thinks the network needs to be changed, he has quite a lot of skin in the game, and he would lose his job is he didn’t do what was right by the shareholders. Facebook wouldn’t be making this move if it would take a sever hit on revenue. So don’t worry – your paid advertisements and post promotions should be just fine.

That said, these changes may affect the amount of money you spend on Facebook promotions as an element of your overall marketing mix (or where you spend it within the network), but time will tell. We’ll just have to wait and see.

Focus on Patient Experience and You’ll Be Fine 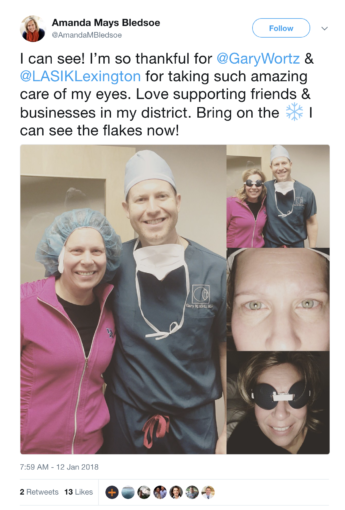 I can see! I’m so thankful for @GaryWortz & @LASIKLexington for taking such amazing care of my eyes. Love supporting friends & businesses in my district. Bring on the ❄️ I can see the flakes now! pic.twitter.com/tiqw9nTL7e

So, is Facebook going away? Definitely not. Will advertising dollars be wasted on Facebook? Not a chance.

The News Feed changes Facebook announced this week may have implications for your social media marketing strategy, but using these recommendations should help give your ophthalmic practice the best chance of success when it comes to social media.